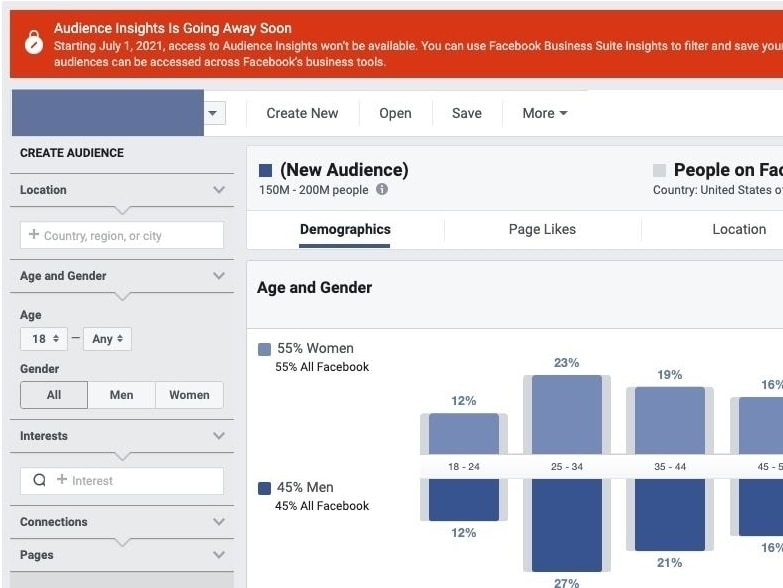 A few days ago, I logged into a client’s Facebook Ads Manager and was greeted by a big red announcement bar.

According to this, Audience Insights is being eliminated as of July 1. Facebook directs you to something called Business Suite Insights instead, but that's not yet available to all accounts.

This comes after last month’s announcement that Facebook Analytics will be gone at the end of June, and Facebook Attribution will sunset by August. Once again, advertisers are encouraged to use Business Suite, which we don’t know much about because it’s not widely accessible.

Let me bring some clarity here. These scattered changes add up to one big truth: Facebook is overhauling its approach to ads in response to iOS 14’s app tracking transparency policy (ATT) which is rolling out on April 26th. If you missed our deep dive on that, you can review it here.

As part of its iOS 14 response, Facebook has also said that it will replace 1:1 attribution with statistical modeling. I’m optimistic about this: Statistical modeling works best when you have a lot of data, and nobody—except Google or Amazon—has more data than Facebook. Want proof? Consider Facebook’s audience expansion option, which can grow a targeted audience pool by a factor of 10 or more. You might think a campaign aimed at 100M users would be too broad, but Facebook’s algorithm is so good at what it does, it can often find the right audience better than you can.

Which brings me back to the insights and analytics changes. We’ve known for a while that organic reach is dead; Facebook is all about pay-to-play. That, plus the loss of cross-platform data, makes the trajectory pretty obvious. We are moving toward a world in which your customers never have to leave the Facebook ecosystem, and you should adapt your strategy accordingly.

In late 2020, Facebook spent $1B buying Kustomer, an “omnichannel CRM platform” with baked-in automation. And this February, Shopify expanded Shop Pay to all Shopify merchants selling on Facebook and Instagram. I expect we’ll see new instant checkout products from Facebook by the end of the year—and they may well outperform other sales platforms because of Facebook’s data power.

At this point you may be wondering, “What am I supposed to do about all this?” My first piece of advice is: Focus on the big picture. The future Facebook wants (and therefore, the future that will happen) prioritizes on-platform engagement. Customers will see your paid ad, click, and check out without ever leaving the app. How does this change your KPIs? How will you optimize ads for on-platform shopping, lead generation, and instant experiences? How will your creative and merchandising change to serve these goals?

Whether we like it or not, the open web is getting smaller. The so-called advertising triopoly of Facebook, Amazon, and Google is here to stay, and as they are cut off from cross-platform tracking, their own ecosystems will become more robust. Yes, advertisers are losing access to data, and yes, there will be transaction fees associated with Facebook checkouts. But we gain the full power of Facebook’s massive data, aimed at Facebook itself—and ultimately, this may be the best way for advertisers to meet their goals.